The manor of Wickham

in the parish of Clayton and
Hundred of Buttinghill, West Sussex

The manor of Wickham is of some slight interest historically as the name indicates a Roman origin. Several Roman roads cross or bound the manor and significant Roman remains have been found, not least the cemetery uncovered in the sandpits excavated by Brighton contractor W. Hudson in the early years of the twentieth century (Sussex Archaeological Collections Vol LXVI).
More recently, at the time of the Domesday Book (1086) the manor was held from William de Warenne, Lord of the Rape of Lewes, by the wife of William de Watteville. She also held the manor of Clayton. Before the Battle of Hastings it had been held by Azor, one of the county's leading Saxon nobleman. Interestingly the same Saxon tenant, Alwin, occupied the manor in 1086 as in 1066. 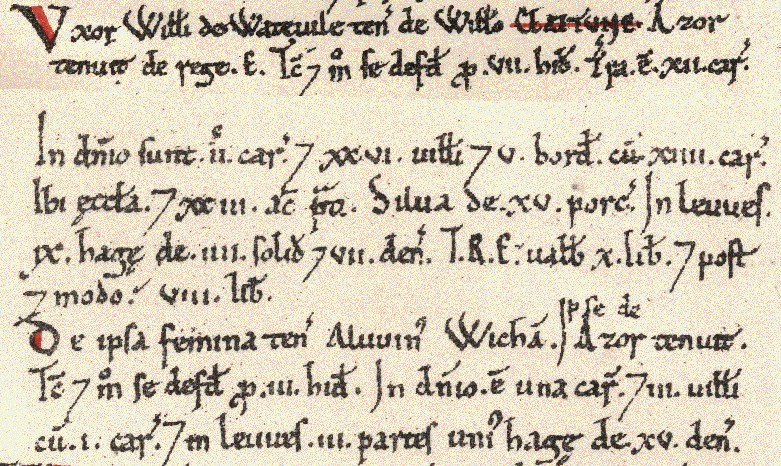 The wife of William de Watteville holds Clayton from William. Azor held it from King Edward. Then and now it was valued for 7 hides. There is land for 12 plough teams [probably 120 acres of arable land per plough team of 8 oxen]. In the demesne [the lands associated with the principal dwelling] are 2 plough teams and 26 villagers and 5 smallholders with 14 plough teams. There is a church and 23 acres of pastureland. [There is sufficient] woodland for 15 pigs. In Lewes [are] 9 'hagae' [tenements?, dwelling plots?, hedged enclosures?] of 4 shillings and 7 pence. In the time of King Edward its value was 10 pounds and afterwards and now 8 pounds.
From the same woman [the wife of William de Watteville] Alwin holds Wicham. He himself held it from Azor. Then and now it was valued for 3 hides. In the demesne there is land for one plough team. [There are] 3 villeins with land for one plough team. In Lewes [are] 3 parts of one 'haga' [valued] at 15 pence.

It is usually assumed because of the survival of the name Wickham in Clayton Wickham and Hurst Wickham that the manor of Wickham straddled the boundary between the parishes of Hurstpierpoint and Clayton. Evidence to support this view is scanty. It is true that early C20 maps show Wickham Farm and Hurst Wickham Farm adjacent to College Lane in Hurstpierpoint but are they named merely because of their nearness to the manor of Wickham or because they are actually part of it?

It is certain that most of the manor of Wickham lay in the parish of Clayton and it seem distinctly possible that it all did. The manor is mentioned in numerous papers in the Danny Archives, held at the East Sussex Record Office, and catalogue item 2099, a map of 1732 by Thomas Pointin, contains "An Exact Survey of certain lands called North-wickham Meads,Court-ends, the Sands, the East Hassocks, Willcomb-crofts, East hams And West hams Lying in the Mannour of Wickham in the Parish of Clayton And Hundred of Buttinghill ..."
All these lands listed are indeed entirely in the parish of Clayton. 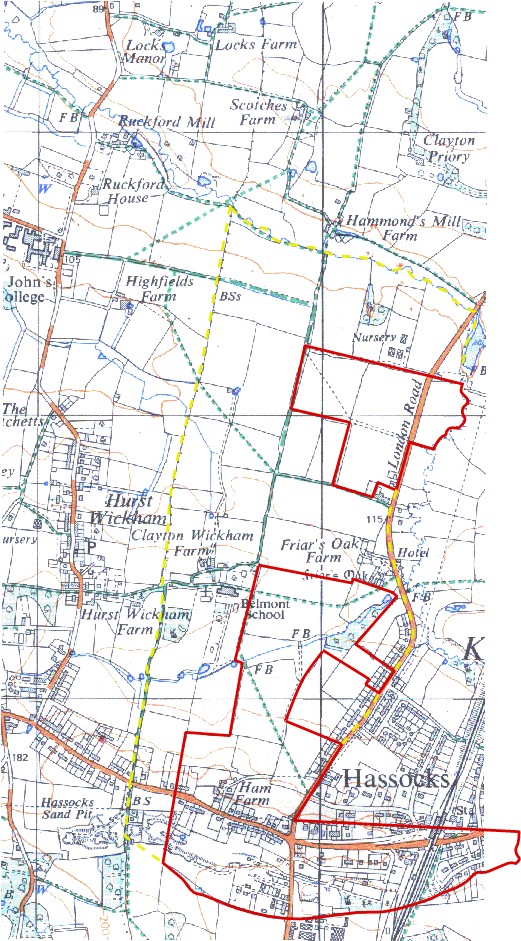 The area outlined in red comprises all the lands described on the 1732 survey, totalling 219 acres, of which 137 were arable. The boundaries to south and west are either natural or long established - streams or Roman roads - and so may be judged unlikely to have changed. The northern boundary may originally have been a stream a little north of the outline. To the West the situation seems more problematic.

Some lands appear to have been lost from the manor by 1732 including Clayton Wickham Farm, presumably the site of the original 'demesne'. The existing Hurst/Clayton parish boundary would seem a likely candidate for the original western boundary and if the red outline were to be adjusted to that line (dotted yellow) and the other bits that had apparently been nibbled out were restored (dotted yellow border) the total area of the manor would rise to approx. 470 acres. If the arable content rose in the same proportion it would amount to 290 acres. This compares with 240 acres represented by land for two plough teams mentioned in the Domesday account.
(1 hectare = 2.47 acres)

If these suppositions are correct it is difficult to see how the manor of Wickham could have stretched further west than the Hurst/Clayton parish boundary and into what is now the parish of Hurstpierpoint.

If you know different please email