When does a bell strike?

Apart from the obvious ‘when it goes dong’, the simple answer to the question is that for a bell turning full circle in the English fashion, starting from the inverted position, the clapper strikes the bell shortly before the end of the revolution and about 1½ seconds after the start of the pull. However, there is more to it than this and a lengthy discussion on various aspects of the subject took place on the change-ringers email list in August 2010. A number of issues were raised and not fully resolved. Among them:-

Tests carried out in June and September 2010, and described further below, indicated that:-

The term ringing ‘simulator’ has a range of meanings. In the context of these notes it refers to a set of silenced tower bells equipped with sensors attached to a computer or dedicated simulator, the simulated sound of each bell being generated in response to signals from the relevant sensor – in effect the simulator is just providing a facility for ‘silent’ practice on dumbbells or tower bells with silenced clappers.

The term can also refer to the computer generation of ringing changes with simulated sound, with or without the facility for the simulated sound of one or more of the bells to be triggered by the pressing of a key or by signals from sensors.

Typically, ringing simulators determine the moment to produce the sound of a particular bell by using an optical sensor responding to light reflected by a reflector or reflectors on the rim of the bell wheel. There are two systems. One system uses two reflectors, one placed so as to be in line with the sensor when the bell should strike at handstroke and the other when it should strike at backstroke. This is a ‘strike now’ system and, provided the reflectors are correctly placed, the possibility of a discrepancy between the timing of the simulated sound and the actual moment of strike of the clapper, if the clapper were untied, is minimal.
The second, more common, system uses just one reflector, placed so as to be in line with the sensor when the bell is mouth-down at bottom dead centre (BDC). With this ‘strike later’ system a delay has to be provided between the moment when the signal is received from the sensor as the bell passes BDC and the moment, approx. 120 ° later in the rotation of the bell, when the clapper should strike it. This delay can be preset for each bell but is then fixed. One of the points at issue is whether a fixed delay is accurate for all conditions of ringing or whether, for example, the actual time between the bell passing BDC and the moment of clapper strike varies slightly according to whether the bell is being rung at steady rounds speed, or is hunting up or down, or is being overpulled or overchecked to correct an error. If the actual time from BDC to clapper strike does indeed vary then the fixed delay from BDC to the moment of simulated striking represents an error.

To attempt to determine the accuracy of simulated striking, advantage was taken, during odd struckness measurements being made on the ring of 10 at Southover, Lewes, Sussex to try the effect of deliberately overpulling the 5cwt 2nd bell. The measuring apparatus used was a ‘Griffometer’, which measures the actual time from a bell passing BDC to the moment of clapper strike, laser light returned from the reflector starting the timing sequence and the sound of the strike detected by microphone ending it. It was found that on the particular bell being tested the average handstroke time from BDC to strike was 314ms when pulling normally but 306ms with extreme overpulling (and checking!).

This reduction in time between BDC and strike produced by overpulling does represent a loss of synchronism between simulated and clapper sound but the difference of 8ms is minimal and it is doubtful whether, even on a lighter tower bell with ‘normal’ overpulling, a detectable discrepancy would occur.

Further measurements were carried out in an attempt to determine how much the time from pull-off to actual clapper strike could be reduced by over-pulling, and also to try and build up a better picture of how the speed of a bell and wheel varies generally during rotation. 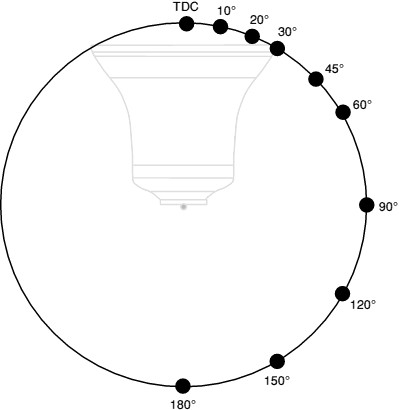 The same 5 cwt bell was fitted with reflectors on the rim of the wheel, the reflectors being so positioned that they were in line with the timing device (a Griffometer) when the wheel was at angles of 0, 10, 15, 20, 30, 45, 60, 90, 120, 150 and 180 degrees from TDC.
The reflectors were covered with opaque tape, the tape being removed from just one reflector in turn for each test. Timing started as the uncovered reflector passed the laser beam of the timing device and finished as the microphone in the timer detected the clapper striking the bell. Each test comprised two groups of three or more handstroke pulls. For the first group the bell was rung normally; for the second group the bell was pulled as hard as possible at the start of the stroke (with correspondingly vigorous checking at the end!).
The results were tabulated and mean timing values calculated for each group of pulls, for both normal pulling and over-pulling. These figures show that it is certainly possible by vigorous overpulling at the start of the stroke to shorten the time from TDC to strike very significantly. The reduction on the 5cwt bell under test from 1365ms with normal pulling to 1057ms with initial overpulling amounted to 308ms. 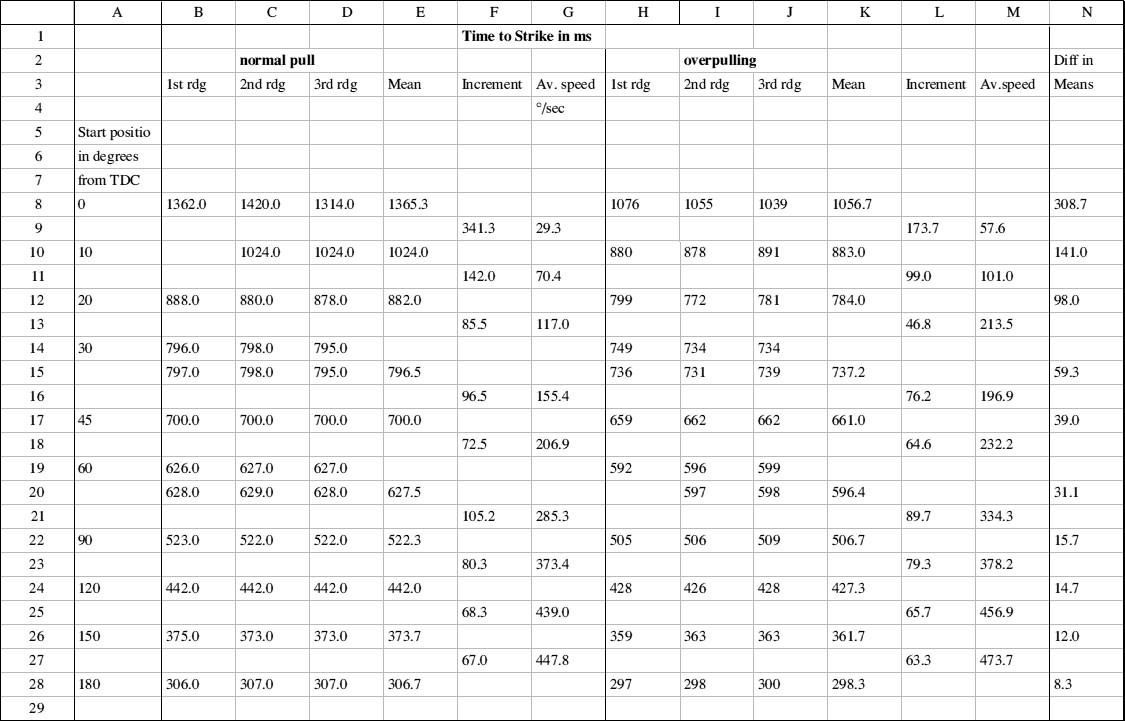 Also, the times between successive reflector positions were used to determine average angular speeds for each section which were then plotted against angular displacement of the wheel from TDC. 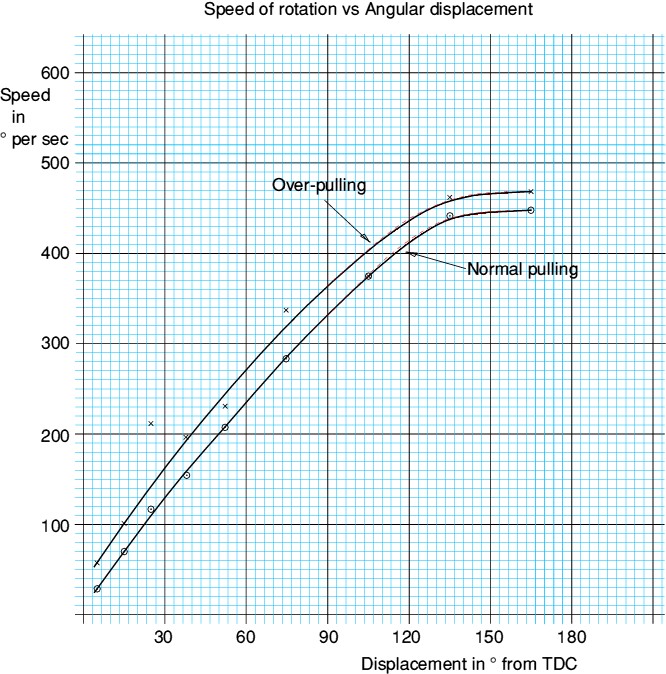 1. As has been shown above, the mean time from pulling off to strike was 1365ms with normal pulling and 1057ms with initial overpulling, a reduction when overpulling of 308ms. [300ms of this reduction occurred before BDC and 8ms after].
These figures are based on timing measurements starting at top dead centre. TDC has been adopted as an arbitrary start point, because of the possible wide variability in what happens in the few degrees at the start of the stroke before the bell passes the point of balance. In practice, therefore, the reduction by overpulling could well be greater than the 308ms measured from TDC. On the other hand, the degree of overpulling in the tests was much greater than would be encountered in normal ringing.

2. The reduction in the time taken by the bell to reach BDC with initial overpulling has no direct bearing on the issue of simulator accuracy (i.e. its closeness to the actual clapper strike). This is because, as already stated, the timing delay process* only starts when the bell reaches BDC.

3. Producing a curve purporting to be of actual speed by plotting average speeds as if occurring at the mid-point of each timed section is an approximation only strictly valid when the rate of acceleration is constant. In practice the error is small. For the first part of the curve, where the angular acceleration of the bell is due largely to the ringer’s constant pull, the curve is fairly linear. For the latter part, where the bell is entirely under gravity as it approaches BDC, the acceleration is falling rapidly and the speed change is relatively small. The dotted alternative ends to the curves indicate a conjectural correction.

As a point of interest, the final speeds of approx. 470 and 450 degrees/sec for forced and normal pulling represent wheel rim speeds of approximately 14 and 13 mph respectively.


So when does a bell strike? 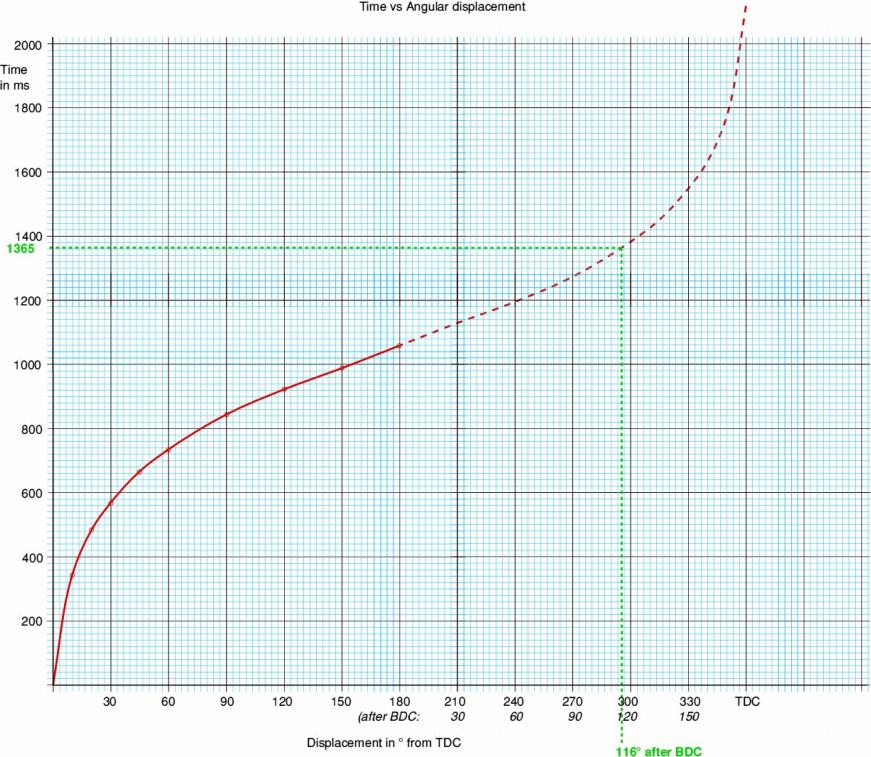 Time was plotted against Angular Displacement (for normal pulling only). This produced a nicely uniform curve with a distinctly linear final portion approaching BDC, enabling the curve to be copied and reflected to produce an approximate extension covering the period from BDC to TDC. It was then possible to project across to this curve the time from TDC to strike, 1365ms, and read off the displacement corresponding to the moment of strike: approx 116° after BDC.

There is some evidence from other sources to suggest that this displacement figure may be on the low side and also to suggest that the moment of strike occurs later in both time and angular displacement on heavy bells. Figures for a typical ring of 8 (not Southover) indicated a gradual if irregular progression for strike point from about 120° after BDC for the lightest bells to 130° after BDC for the heaviest.

120° after BDC represents 60° before TDC, corresponding to 2ft.6in. of rope stroke before TDC. Observation and movie film of a different, slightly lighter, bell, was broadly in line, indicating a rope movement of approx. 30" on a 5ft dia. wheel between clapper strike and end of stroke.

Assuming a point of strike approx. 60° before TDC, there is very little opportunity for any useful degree of checking to have taken place by the time the bell sounds – so vigorous checking towards the end of the stroke will not advance the moment of strike and will not of itself introduce error between simulated sound and actual clapper strike.

My grateful thanks to Nick and Matthew Cullen for their assistance at Southover and to Alan Griffin for the loan of the Griffometer.